A new study has revealed early diagnosis and immediate start of treatment enables people newly diagnosed with HIV to suppress their virus quicker, rendering the virus undetectable in their body.

Her latest research results demonstrated that it is possible, with immediate start of treatment, to reduce the time of viral suppression from 95 days to 55 in patients newly infected with HIV. This means that the time from the moment a person is diagnosed with HIV up until the moment when the infection can no longer be detected in the body, can be reduced by 40 days (on average). This is made possible with a new type of care trajectory that the H-TEAM has developed.

“We have developed a care trajectory that is unique. People who receive a positive HIV diagnosis access treatment the same or the next day. Normally, this can take several weeks if you are diagnosed in the Netherlands,” Dijkstra says.

AIGHD is the coordinator of the H-TEAM project, which aims to decrease HIV among high risk groups in Amsterdam such as men-having-sex-with-men (MSM) and migrants. It also seeks to improve the prognosis of HIV-infected individuals and reduces their risk of transmitting HIV to others.

Dijkstra works with the Public Health Service in Amsterdam, which is one of the partners on the project. Their new HIV test is quick to administer and after one and a half hours it gives the result. If a person tests positively, that person is referred immediately to one of the hospitals in Amsterdam for care.

“We use a point of care RNA test, which can identify the virus directly, already 7 days after someone has contracted HIV. The standard type of tests only detects antigen or anti-bodies of the virus. The standard tests can only be applied after 2 weeks to 3 months when antibodies have developed, which causes delays in treatment. The point of our work is to shorten the time span from infection to undetectable levels,” she added.

Another advantage of early treatment is that it prevents the virus from spreading to other people. Since the concentration of the virus in the blood is so high initially, other people more easily contract the virus through blood or fluids.

“In general, we see a positive trend in the Netherlands with the number of new infections going down. However, it is important to keep developing new treatment trajectories that improve care and reduce transmissions, which is why this study is so important”.

Read the article on the AIGHD website. Read more about the H-TEAM’s research into early treatment here. 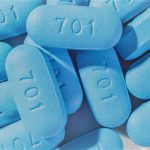 Antony Oomen: “The end of HIV is not a fantasy, it’s a political choice”Home News, Nieuws, PrEP (Pre-Exposure Prophylaxus)