A look back at a succesful NOVA participants meeting

The evening started with Pien van Paassen, PhD researcher on the NOVA study, who spoke about the results of the qualitative study conducted within the NOVA. This qualitative study focuses on how the different aspects of diagnosis and participation of the NOVA have been experienced, and the participants’ views on HIV healing and participating in healing research. The Q&A session that followed focused mainly on the possibilities for the participants to participate in a healing study in the future, and whether they would be forwarded from the NOVA for this.

The second speaker was the principal investigator of the NOVA study, and an internist-infectiologist and clinical immunologist at Amsterdam UMC, Dr. Godelieve de Bree. She gave an update of the NOVA study: she talked about the current number of participants in the study and per study group and showed an overview of the mean time to unmeasurable viral load and the recovery of the immune system over the time of the included participants. In addition, she explained which part of the CD4+T cells make up the viral reservoir of the virus, and how this is investigated within the study by means of a DNA technique. She stated that the research has shown that only a small part of the virus is competent to infect new cells. During the Q&A, mainly technical questions about the HIV virus and CD4 cells were discussed and answered.

Finally, Dr. Casper Rokx, Internist-infectiologist at Erasmus MC, gave a presentation on cure research. The NOVA study contributes to knowledge about what a cure for HIV could look like, by making known which conditions are necessary for this aim. He also discussed the difference between sterilizing and functional cure, and stated that if there ever was a cure within the NOVA, it would be functional cure. During the Q&A it was discussed whether the HIV load and the CD4-count at diagnosis are related to the chance of functional recovery, of which Dr. Rokx stated that the number of virus particles in the blood is probably related to this. It was also discussed whether cured people with HIV can be re-infected, of which Dr. Rokx unfortunately had to state that there is a chance. He cited the example of Timothy Brown, who continued to take PrEP after his recovery to protect himself against reinfection. Finally, Casper Rokx talked about comparable studies in Europe, that are being kept in touch under the heading of EU for Cure, and American studies where groundbreaking results are found. He emphasizes the importance of these many studies, because many participants are needed to obtain decisive results.

The evening was concluded with a panel discussion, moderated by Maarten Schim van der Loeff, on the meaning of HIV healing, the changes and ethical morality surrounding medication, the importance of listening to participants, and the possibilities of using animals for cure studies.

We want to thank all the participants for their participation and interesting input during the session! 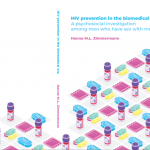 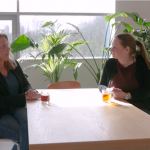